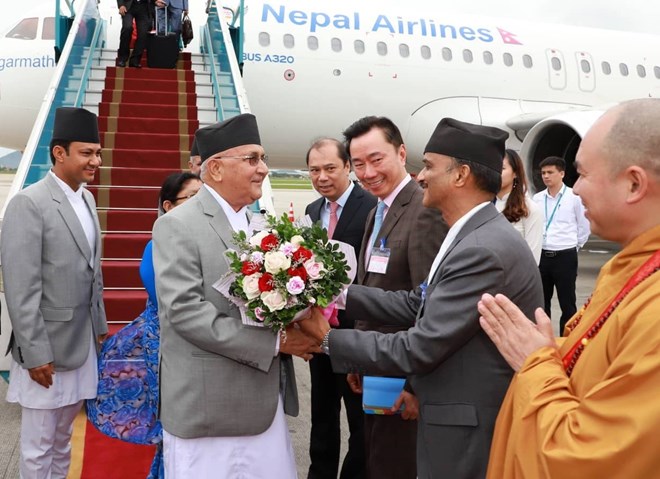 Hanoi (VNA) – Nepali Prime Minister K P Sharma Oli began his official visit to Vietnam on May 9, during which he will attend the UN Day of Vesak 2019.

Accompany him in the four-day visit are Foreign Minister Pradeep Kumar Gyawali, Advisors to the PM Bishnu Prasad Rimal and Rajan Bhattarai, and Nepali Ambassador to Thailand Khaganath Adhikari, among others.

Vietnam and Nepal set up their diplomatic relations on May 15, 1975 and have maintained sound relations in many areas. The two sides have regularly exchanged delegations in various areas from politics to trade.

Over the past 44 years, Vietnam has offered support to Nepal, including 50,000 USD in aid to help it deal with earthquake consequences in 2015. Nepal has supported Vietnam in citizen protection. The two sides are working together on the signing of an agreement on visa exemption for diplomatic and official passport holders.

The two countries have supported and collaborated with each other at multilateral and international forums. Cultural and tourism cooperation as well as people-to-people exchange have been strengthened.

The visit takes place in the context of smooth developments in the traditional friendship between Vietnam and Nepal, especially collaboration through the Party channel and economic-trade partnership.

Vesak 2019, or the 16th UN Day of Vesak, will be celebrated at the Tam Chuc Buddhism Culture Centre in Kim Bang district of northern Ha Nam province from May 12-14.-VNA